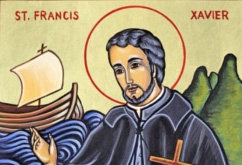 Francis Xavier, born Francisco de Jasso y Azpilicueta (7 April 1506 – 3 December 1552) was a pioneering Roman Catholic missionary born in the then independent Kingdom of Navarre (currently Spain-France) and co-founder of the Society of Jesus. He was a student of Saint Ignatius of Loyola and one of the first seven Jesuits, dedicated at Montmartre in 1534.[1] He led an extensive mission into Asia, mainly in the Portuguese Empire of the time. He was influential in the spreading and upkeep of Catholicism most notably in India, but also ventured into Japan, Borneo, the Moluccas, and other areas which had thus far not been visited by Christian missionaries. In these areas, being a pioneer and struggling to learn the local languages in the face of opposition, he had less success than he had enjoyed in India. In the spirit of Our Patron, St. Francis Xavier, the Catholic Diocese of Jammu-Srinagar promote education at Primary, Secondary and professional level, thus bringing about an all round development of a child.